We awoke to snow falling, what a way to start the new year!
I measured 4″ (10 cm).The violets are always such a pleasant surprise to me. 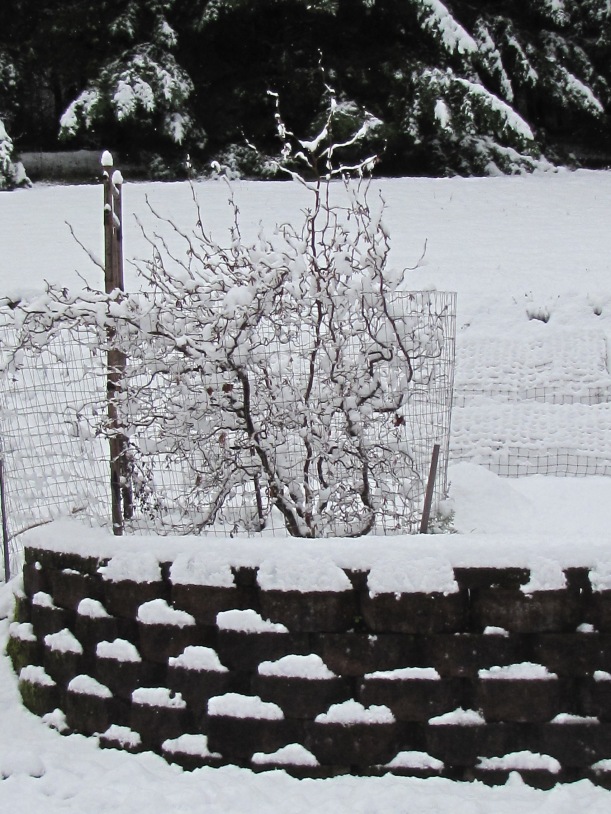 The snow looked especially pretty on this Contorted Filbert bush (aka:  Harry Lauder’s Walking Stick or Corkscrew Hazel) and the bricks.
The snow shows up the deer fence, including the fence behind on the ground,
which protects plants growing on the embankment behind.
Under the behind fences are thriving California poppies and struggling daylilies.

The snow was quite wet and many plants were drooping from the weight of the snow.
I got a broom and walked around the house, knocking snow off branches.
Here are before and after photos of my Rosemary bush,
she is much happier after snow removal.

There are two rhododendron bushes in this photo.
I keep pruning the one on the left, as it grows prolifically.
The specimen on the right has its growth eternally challenged.
Many years ago, our dog’s favorite place to lay was under this particular bush,
but that dog has been gone over 10 years, and the plant has not really bounced back.
I made sure to brush snow from its branches to give it every chance I can. 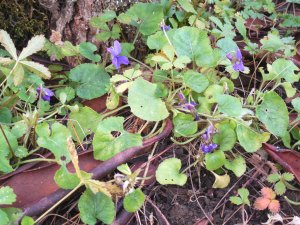 These small flowers have been such a challenge for me to photograph in focus.  I’m not sure what I did different, perhaps it was the time of day, the time of year, whatever!  It worked.

Since the first starts were planted long ago, these flowers have taken off in my yard.  They go dormant in the summer if they don’t get irrigation, but are in their prime in the wintertime.  What a pleasure they are to see, when there is absolutely nothing else in bloom.  We’ve even seen violets popping their heads out in the snow.

An elderly neighbor gave me a shovel-full of these violets from her yard, over thirty years ago.  She has long since passed away, and her garden fell into neglect.  I feel like her garden lives on at my house, as I inherited a number of other plants of hers over the years. 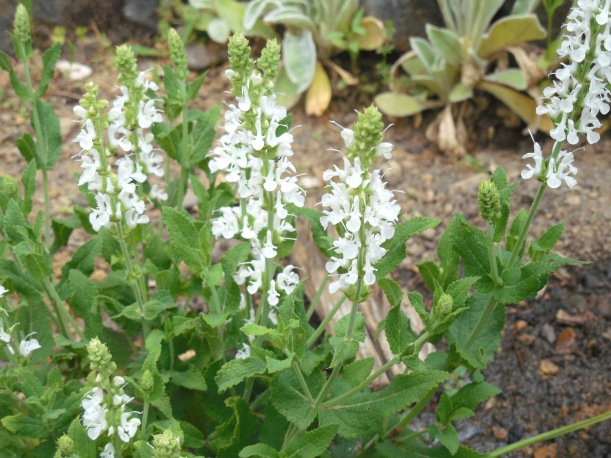 I’ve tried growing various salvias, but this is the first perennial success for me. The flowers might appear delicate, but I think they are sturdy. I’m thinking that if I can keep it deadheaded, I’ll have blossoms for quite awhile. Trying to remember how long it bloomed last summer, which was its first in my garden.

This small plant is positioned to be the first I walk by when entering the gate of a long rectangular flower bed, next to the driveway to my house. The entire bed used to be in sunlight all day long, but things have changed. Just up the hill, redwood trees have grown on the west side of the bed and now give late afternoon shade relief. There is a minor side effect to planting anywhere near redwood trees: those trees have a multitude of shallow roots that will infiltrate anything and everything. So, I’m learning to keep adding topsoil and plant flowers that can think of competing with tree roots. So far, so good.

This shrub was recently covered in flowers, and now the petals are falling. The ground appears to be covered with a light snowfall.

A few years ago, we moved this plant to its present location below a west-facing bedroom window. For a few days a year, you can look out the window and see a blanket of white flowers covering the entire bush.
Then the petals fall and it looks like a snowfall has come through the area in late May – an extremely unlikely event in this area.

Yes, these plants are protected by a deer fence. On the right, are day lily leaves, a month away from flowering themselves.

About a month ago, I took pruning loppers to this shrub, and cut a lot off. It has paid off already, as the stems are stronger and the flowers did not droop excessively.